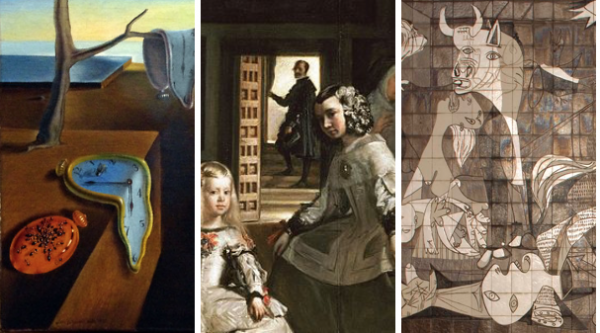 This lecture will look in depth at three iconic Spanish paintings by Diego Velázquez, Pablo Picasso and Salvador Dalí. These three works all have an incredible back-story and also represent very different times in Spanish art history. First is Vélazquez’s painting of the Royal Family in ‘Las Meninas’. Who stands in the doorway? Who is reflected in the mirror? It was painted in 1656 yet art historians still argue fiercely over its subject matter.  Next comes Picasso’s famous ‘Guernica’ his scream of outrage against the bombing of the Basque city during the Spanish civil war. One of the most powerful anti-war images ever created. Lastly we have ‘Persistence of Memory’, Salvador Dali’s dream-like image of clocks “melting” in the sun on the beach.  Are there deeper levels waiting to be discovered here?

Manni Coe MA is originally from the North of England, but he often jokes that the stork forgot his address en route to Spain and dropped him in the UK instead.  Spain, particularly Andalucia, has always been the place he considers home.  Manni has lived in a variety of places in Spain throughout his 18 years as a resident, including Huelva, Seville, Cadiz and Marbella.  He has a wealth of experience as a guide and travel consultant and knows all the hidden corners and secret places Andalucia has to offer.   He is a Company Director of Toma & Coe, boutique tour consultants with 17 years experience in Spain but particularly Andalucia.  Manni previously lectured to the Benahavis Arts Society and his lecture, Three Spanish Painters, was considered to be outstanding.